The Nürburgring is probably the most legendary race track in the world. Contributing factors are the length (the Nordschleife is almost 21km long), how much fun it is to drive, the danger, and the fact that it is accessible to the general public on many days of the year.

The Nürburgring originally consisted of Nord- and Südschleife. The little-used Südschleife was demolished during construction of the modern Grand Prix circuit, which was undertaken after Niki Lauda’s fiery crash and other concerns about the safety of the Nordschleife. Since then, there are two circuits (GP circuit and Nordschleife) that can be used independently or together.

It may not be obvious when looking at the track map, but the Nordschleife is quite fast. Most corners are taken in third gear or higher. The part from Hohe Acht to Schwalbenschwanz is very fluid, knowing your car and the track is more important here than power only. Power does come into play on the uphill part from Breidscheid to Steilstreckenkurve, where there’s a significant difference in speed and track feeling whether your in a 100hp or 300hp car.

Most corners do not have run-off areas. A simple spin may have you touch the barriers. Couple this with the high speeds and it becomes obvious that this is a dangerous track. This is especially true in the rain, when some corners can be very slippery.

The best way to learn your way around the Nordschleife is by playing video games that feature this track. This will teach you where to go, but don’t make mistake of thinking that this will be enough to go really fast. All the tiny details like bumps and different surfaces are impossible to replicate in a video game.

The Touristenfahrten are the easiest way to get onto the Nordschleife. A single lap is, as of 2018, €25 on weekdays and €30 in the weekend. Be advised though that it can be very busy (making it difficult to get a clean lap in), that bikers share the track with cars, and that everything from coaches to supercars does laps. Even if you know what you’re doing, things may not end well when someone ahead of you spins or dumps coolant all over the track. If you want to try Touristenfahrten, I would suggest one of the quieter weekday evening sessions. Just make sure to take it easy.

I instead recommend two things: 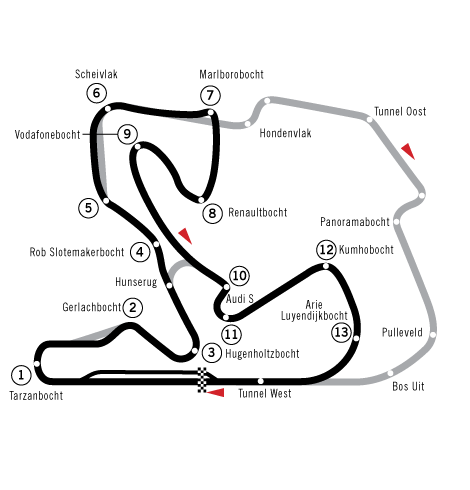 Zandvoort is one of two permanent race tracks in the Netherlands. The history of the track starts shortly after World War II. […]